A Pilgrimage to the Holy Land Part 1 Jerusalem

Part 1 In The Footsteps of Jesus in Jerusalem  May 2008

On 18th May 2008 my friend, Julie, and I flew to Tel Aviv in Israel. After clearing high security customs, we took a taxi for the 45 minute drive to Jerusalem. Our hotel , The Gloria, is situated just inside the old city walls, a stone’s throw from the Jaffa Gate.

The Lobby of the Gloria Hotel, Old City, Jerusalem

Our room has a wonderful view of the Old City, with its terracotta tiled roofs and narrow alleyways.

View from our hotel window 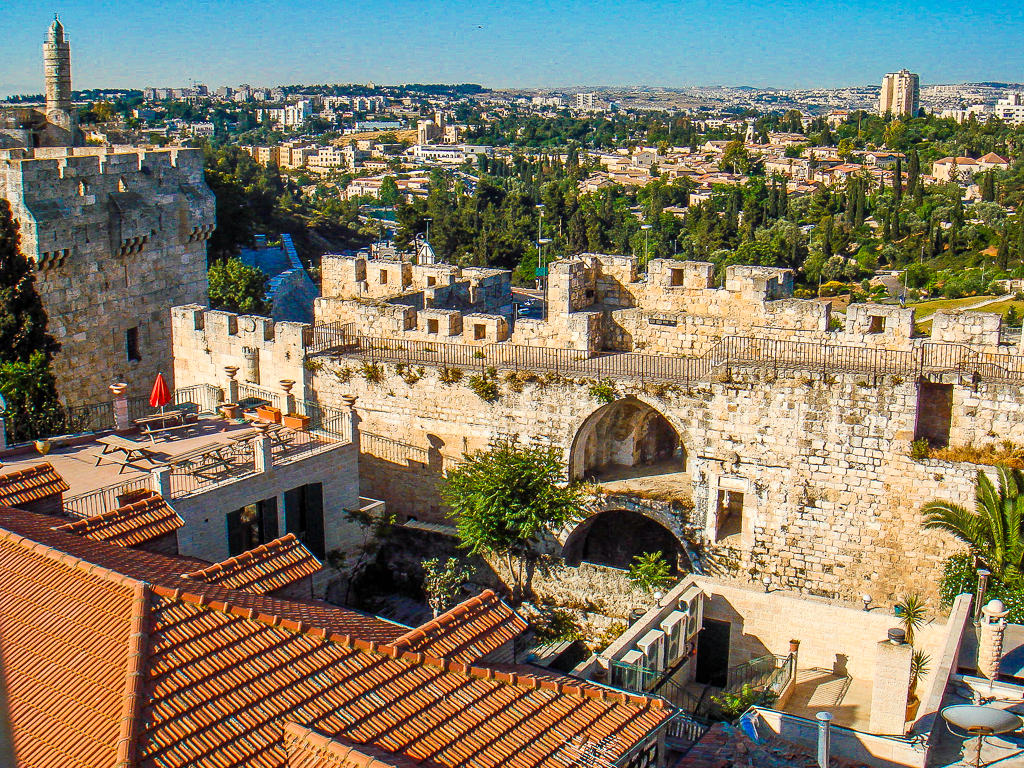 St David’s Citadel and the old stone walls and towers rise protectively above the city. 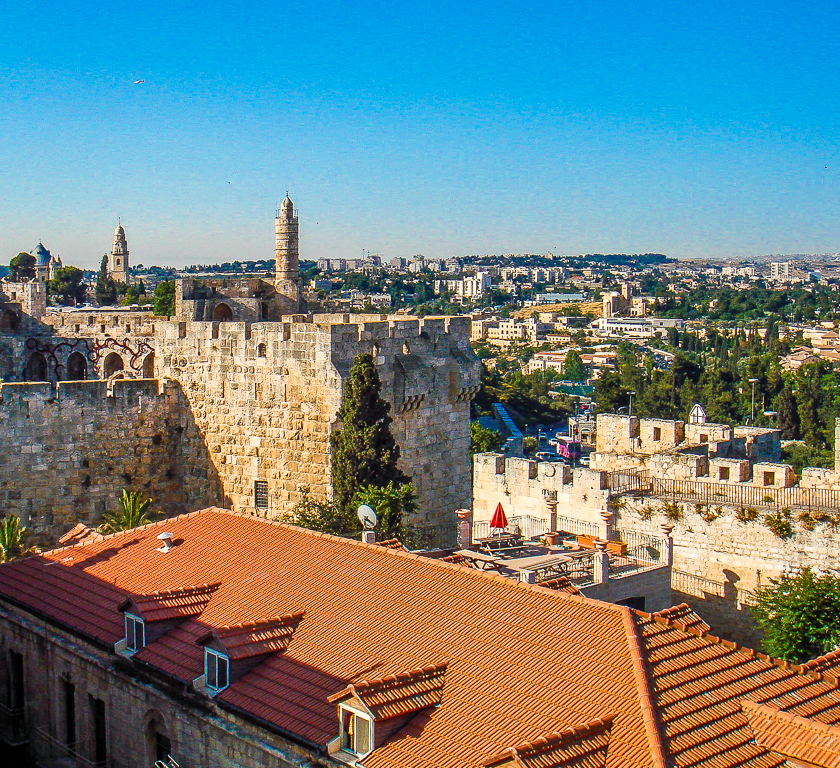 View from the roof terrace of our hotel

This is a dream come true!

This morning we visited the Tourist Information Centre and chose a three-hour walk around the main sites of the Old City. Our expert guide was Asher, who has lived in Israel since 1933. We listened, enthralled, as he summarised three thousand years of Jerusalem’s history, beginning with the life and times of King Solomon, who had the temple built here. Each place we visited was brought to life by the vivid descriptions and background history that Asher shared with us and it was clear that his heart and soul belong here.

Jerusalem’s Old City is divided into four quarters – the Armenian Quarter, the Jewish Quarter, the Moslem Quarter and the Christian Quarter; we had a taster session of each one. To begin our tour, we visited an Armenian Church, located down a small alleyway, the silence and peace broken only by a lone songbird. 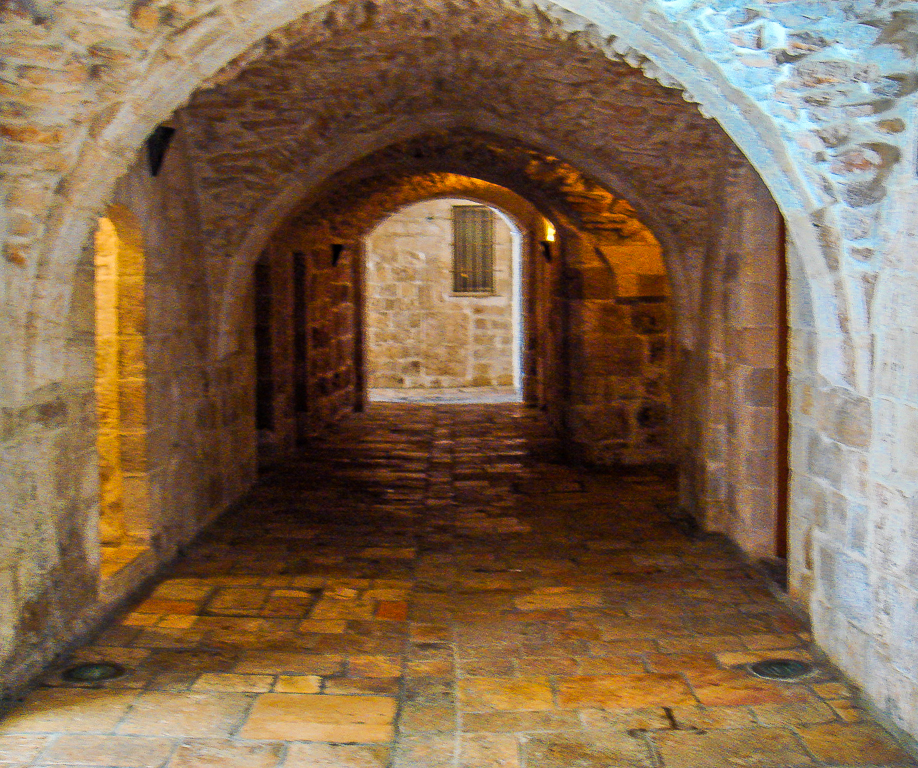 Entrance to the Armenian Church

From here, we ambled along to the orthodox Jewish quarter.

A group of young girls were playing together; all wore stockings and long sleeved dresses. Both young and older men wore long black overcoats and large dark hats, even though the temperatures had soared to around 95 degrees Fahrenheit in the midday sun.

Pomegranate Tree in the Jewish Quarter of the Old City

As we walked, my eyes were drawn to a man standing nearby. He was dressed in white biblical robes, with a head-dress covering the majority of his long, dark, wavy hair. He held a lyre in his hand.

My heart lurched. I stopped and stared, riveted to the spot. In that moment, I went back in time 2000 years and I was looking at Jesus. I felt myself detach from the scene around me, which faded into a dense fog. An intense silence descended upon me and time stood still. Abruptly my heart began to pound and I was back in the present. It took a minute or two to regain my composure.

We made our way down several narrow alleys, coming across the ancient twelfth century ruins of the hospital built by the Knights Hospitallers. Several of the archways remained intact. 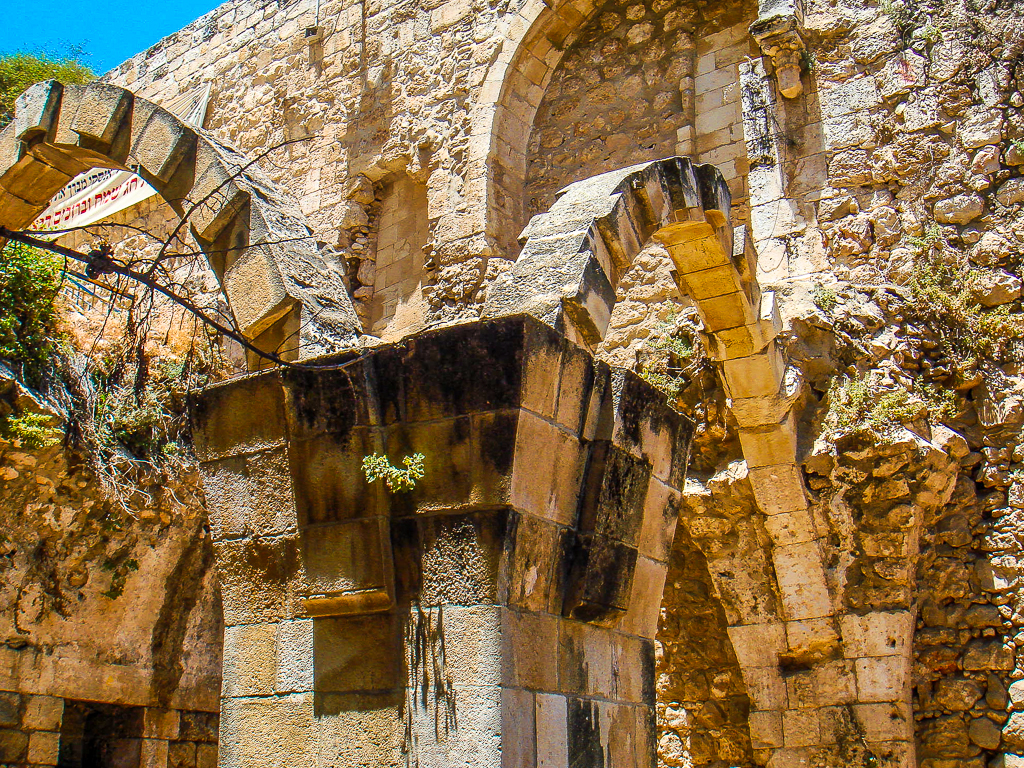 Ruins of the hospital built by the Knights Hospitallers

Each stone was laid upon another, without any kind of adhesive, and the resulting arch was held securely in place by the positioning of a keystone. It is this keystone that holds the whole thing together.

The keystone holding the arch in place

Eventually we arrived at the site of the Wailing Wall, stopping briefly to photograph the Mount of Olives, clearly visible from our high vantage point.

Looking over towards the Mount of Olives

On approaching the Wall, we were searched by armed soldiers, before being allowed to proceed. Jerusalem is full of soldiers, many of them barely out of their teens, and all armed to the teeth. We saw groups of children with their teachers, taking walks around Jerusalem; each of these groups was guarded by an armed soldier. [Only a few weeks earlier, a group of children had been attacked, and eight of them shot and killed]. Soldiers and searches are commonplace in Israel, and although I found this quite alarming at first, I realised that it was for our safety and I soon got used to it, which in itself is quite sad.

On reaching the large open area in front of the Wailing Wall, we were segregated into two groups – men to one side and women to the other, with a high partition in between. 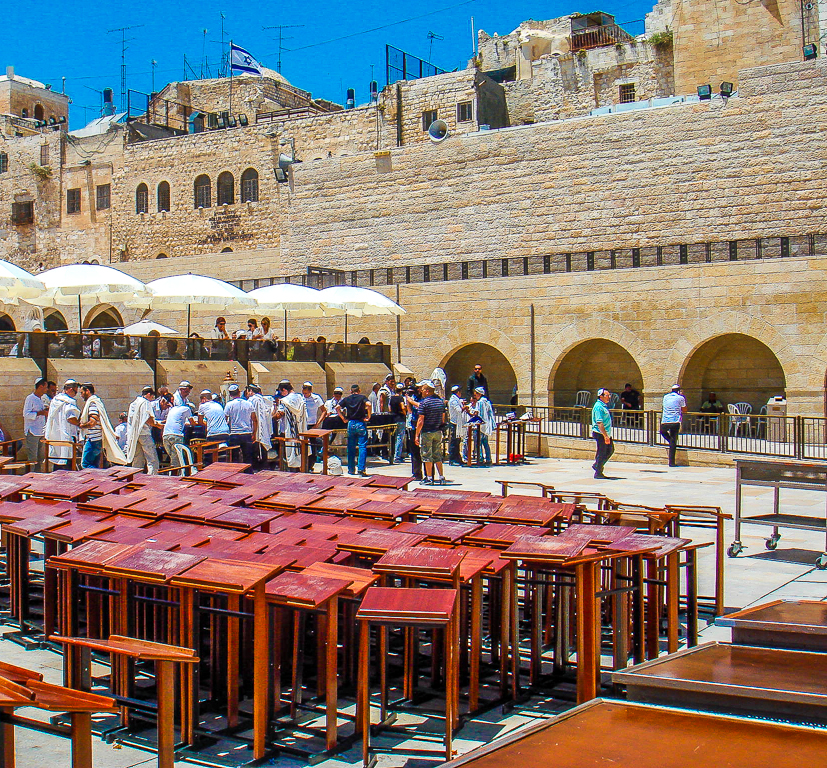 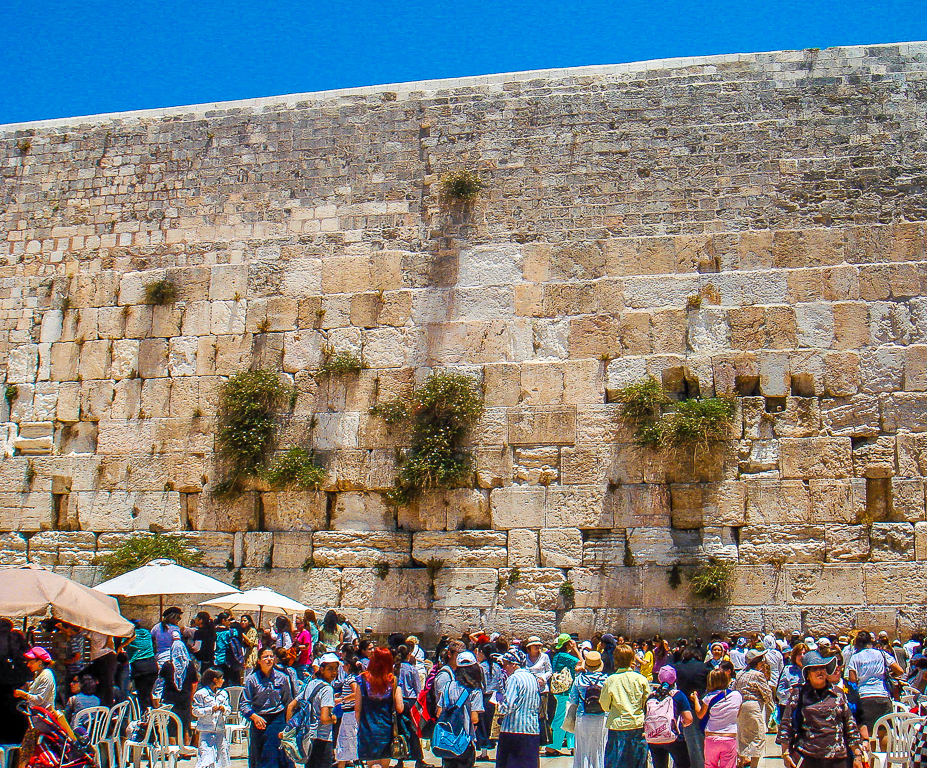 The Dome of the Rock on Temple Mount rose high above the wall. 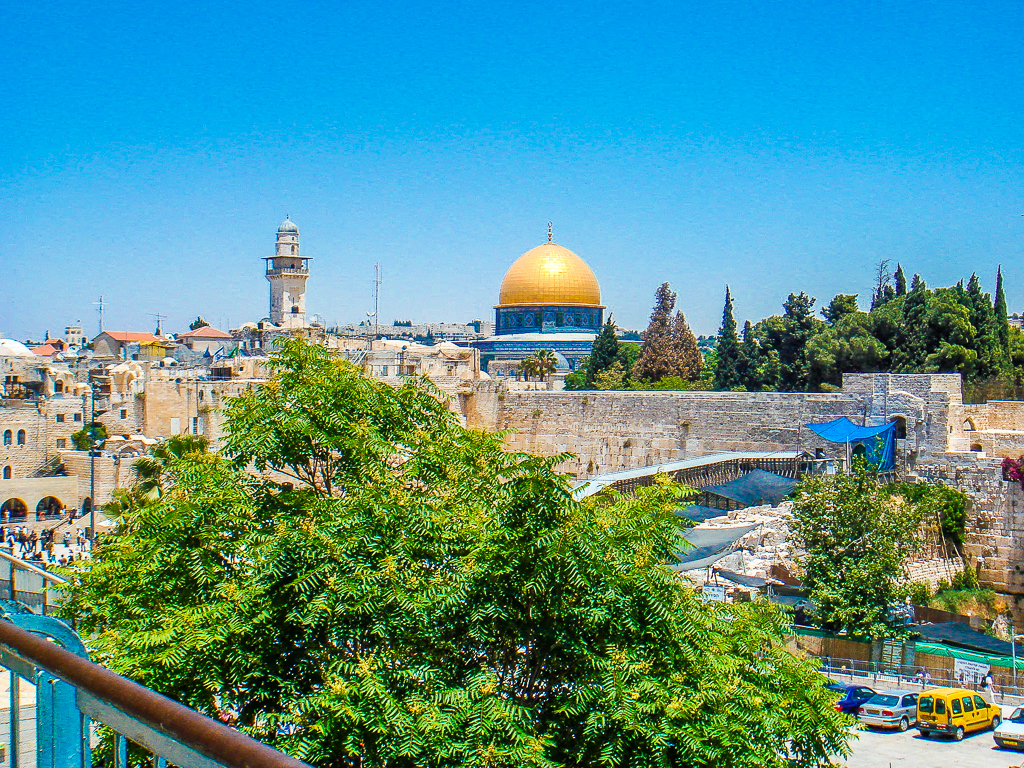 Looking towards Temple Mount in the Muslim Quarter

Several minutes later, we made our way towards the Via Dolorosa, ascending for several hundred yards, passing the various stations of the cross on the way.

Walking along the Via Dolorosa

Our ultimate destination was the Church of the Holy Sepulchre, the traditional site of Jesus’ crucifixion and subsequent burial.

Entrance through the Coptic Monastery to the Church of the Holy Sepulchre,  which is just visible at the top of the photo

On reaching here, we climbed a series of very steep steps that led to the summit of the hill on which Jesus’ cross supposedly stood.  The church is built around this hill.  A queue of pilgrims waited their turn to touch this holy rock. Descending the steps on the other side, we came to a large stone slab with several people kneeling around it. This, we were told, is the very same slab that Jesus was laid on, when he was taken down from the cross.

The slab where Jesus was traditionally laid after crucifixion 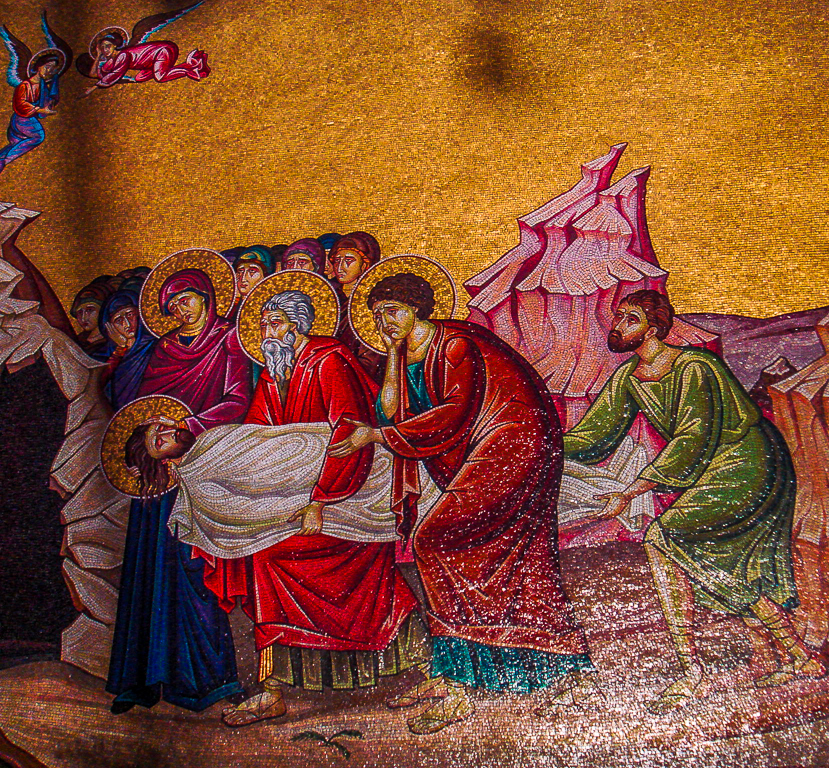 Wall Fresco portraying the removal of Jesus’ body by his disciples

The tour over, we made our way back to our hotel. Our spirits were high and we spoke animatedly of our experiences and impressions of Jerusalem. We decided to visit Gethsemane and met Mahmun, our guide for the evening, in the square in front of the Jaffa Gate. He drove us up to the vantage point on Mount Scopus, adjacent to the Mount of Olives, from where we had stunning views of the Judean Desert towards Bethlehem. 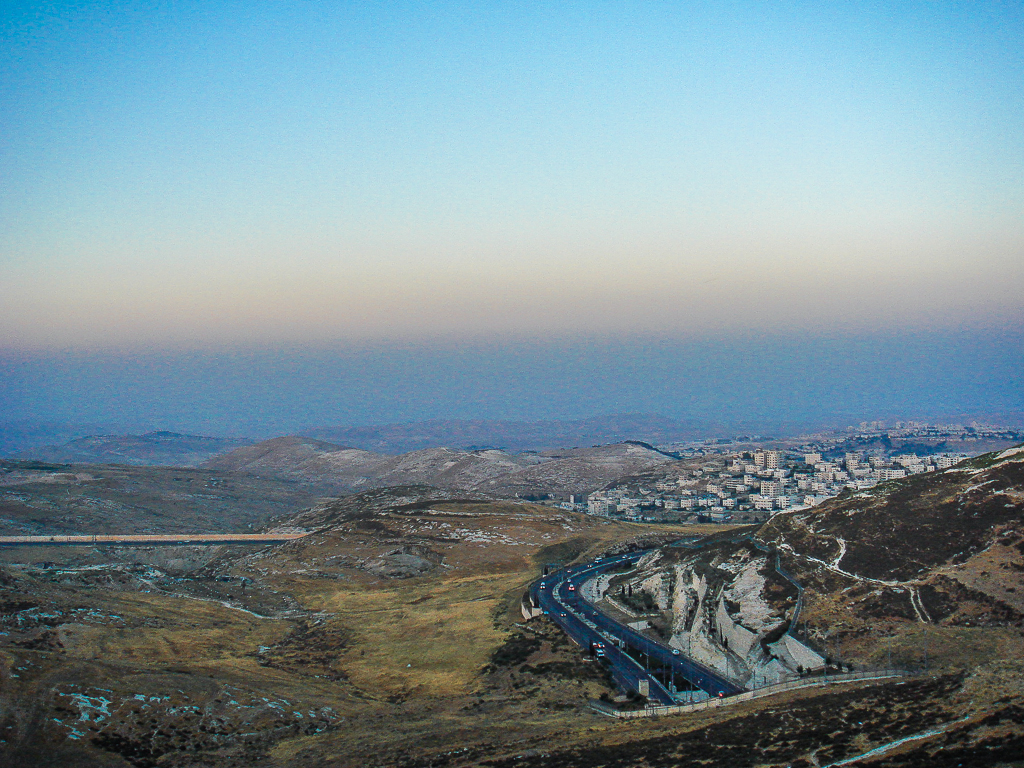 Looking towards Bethlehem, from the vantage point on Mount Scopus

Next we wound our way up the slopes of the Mount of Olives, stopping to take in the magnificent panorama from the top, just as the sun set over the Old City. 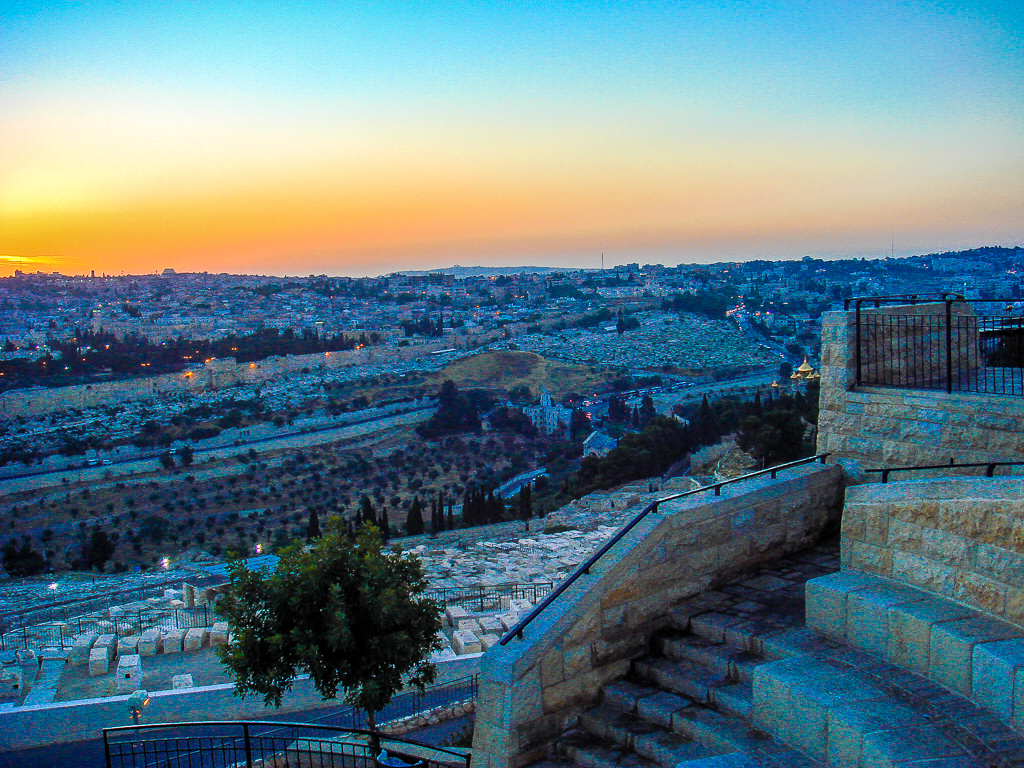 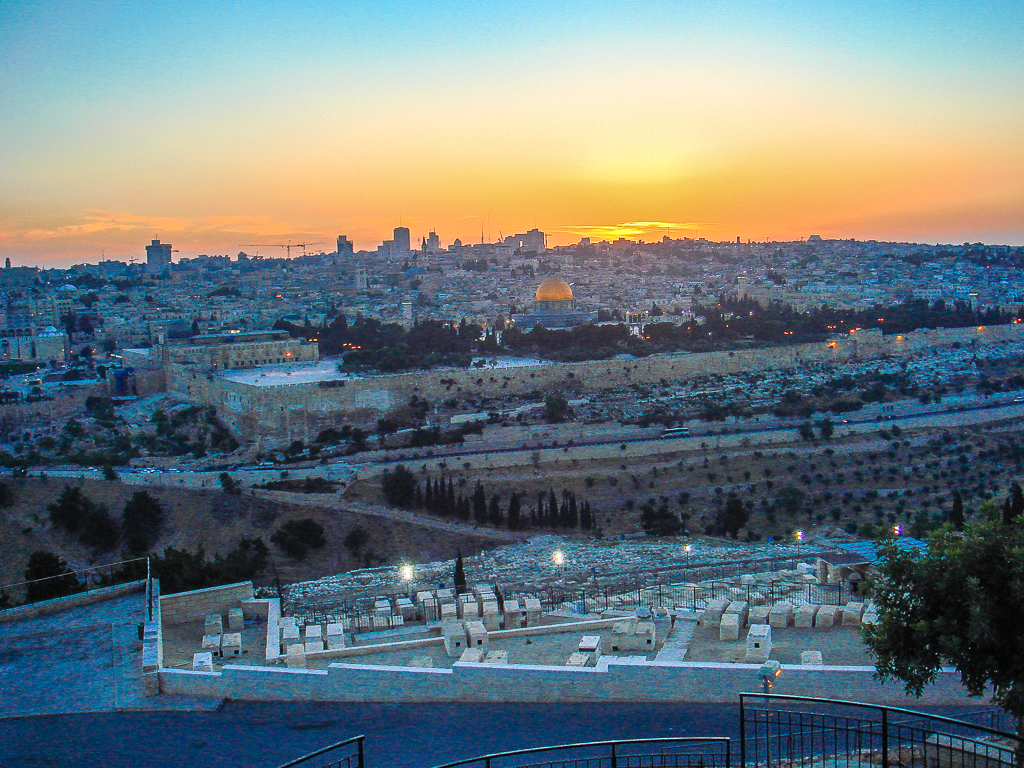 Standing on top of the Mount of Olives, watching the sun set over Jerusalem

When we reached Gethsemane, at the foot of the Mount, it had already closed for the night. We stopped outside of the Church of all Nations [originally known as the Basilica of the Agony] and took some photographs, looking back over the Kidron Valley towards the Old City Walls.

Standing outside the Garden of Gethsemane, looking over the Kidron Valley towards the Old City Walls 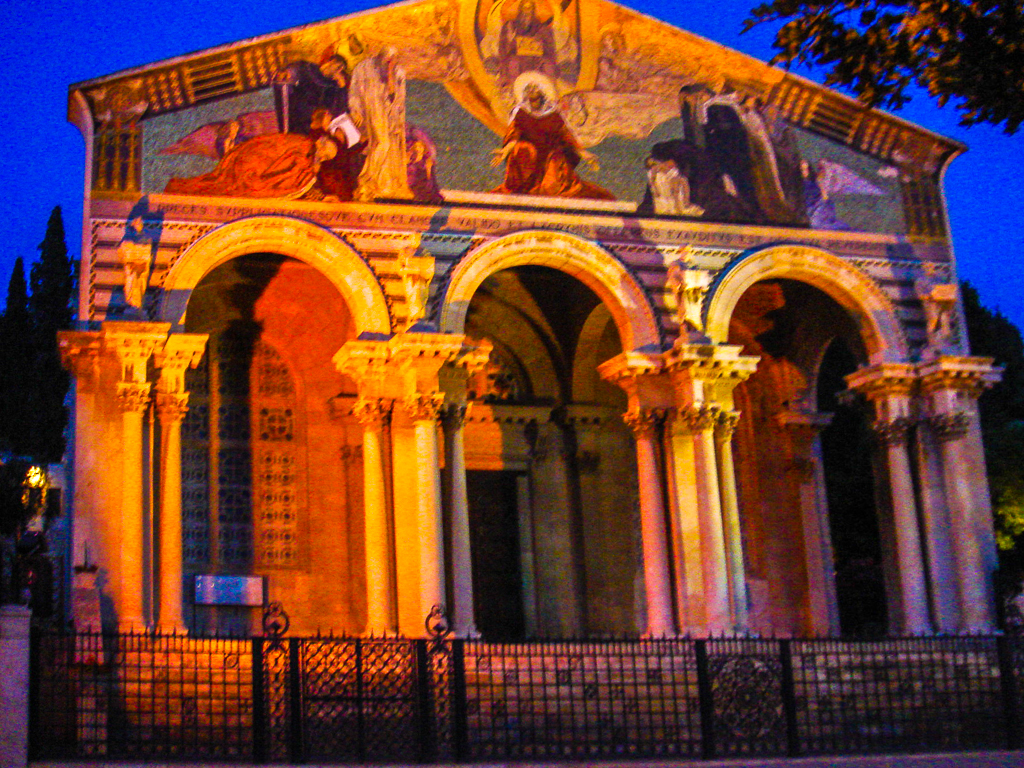 The Church of all Nations at Gethsemane, formerly known as the Basilica of the Agony

On returning to our hotel, we went up to the roof terrace to admire the sights and sounds of Jerusalem by night, and to relax with a glass of wine. The moon was full and the view was spectacular. 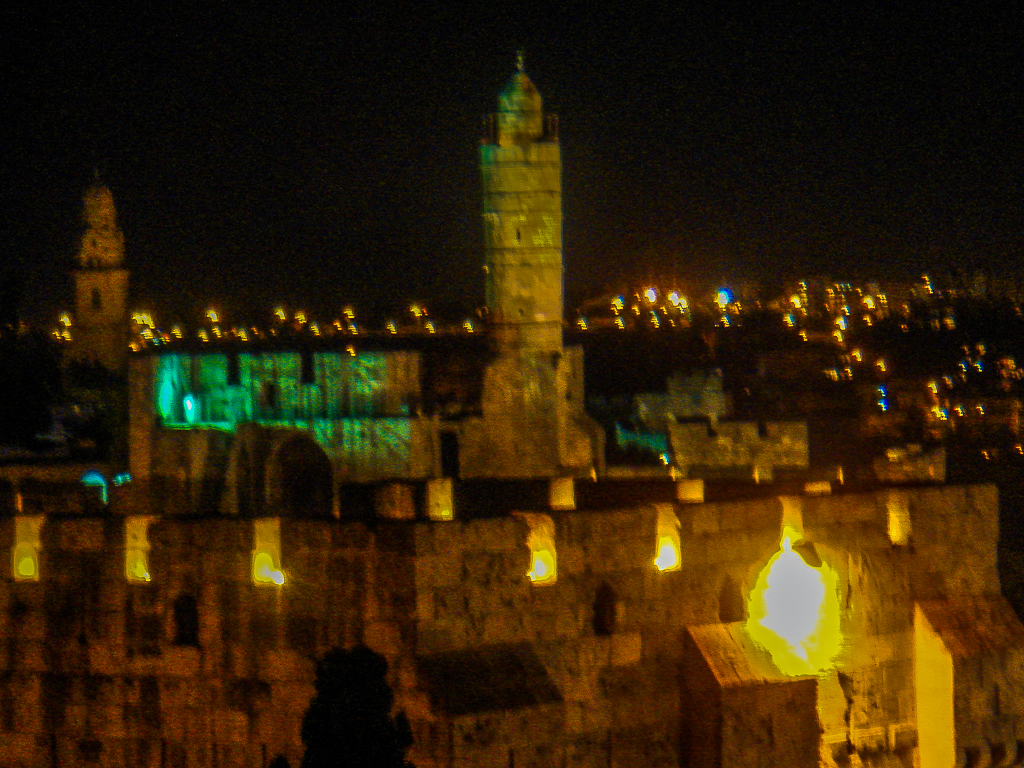 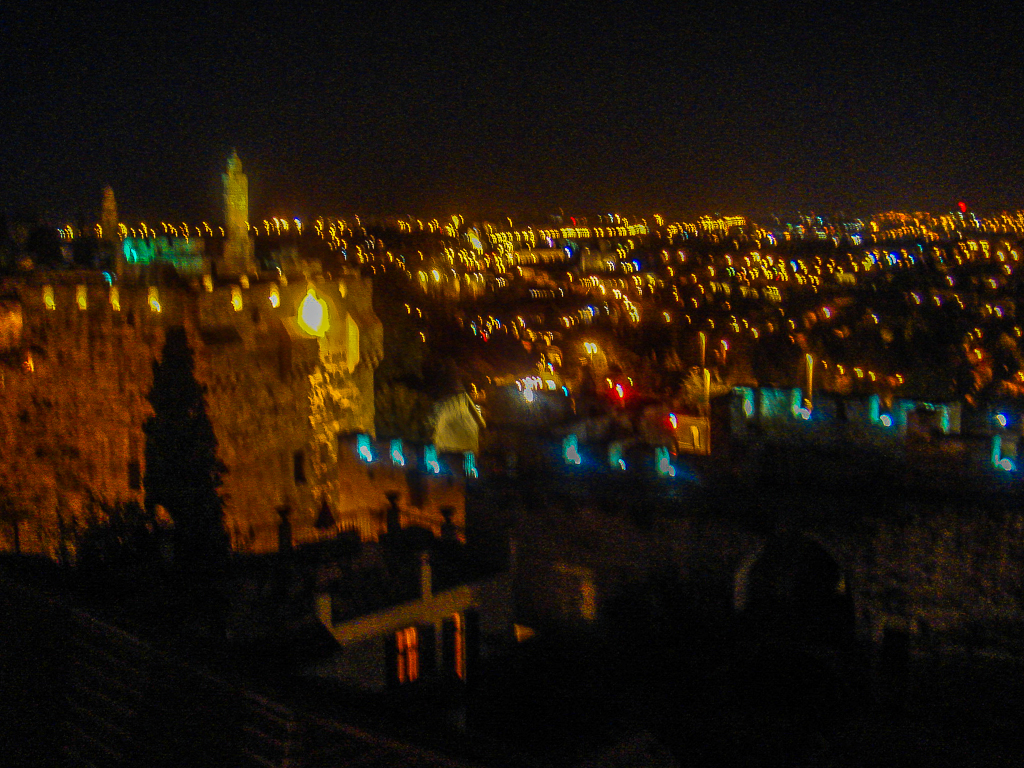 What a trip this is turning out to be, and we’ve been here less than 24 hours!

We spent the day visiting Masada in the Judaean Desert, with a stop at the oasis of Ein Gedi on the Dead Sea.

The Siege of Masada

The Oasis of Ein Gedi

This morning we took a short taxi ride to the Garden of Gethsemane. The moment I walked through the stone doorway into the garden, I had an instant reaction. 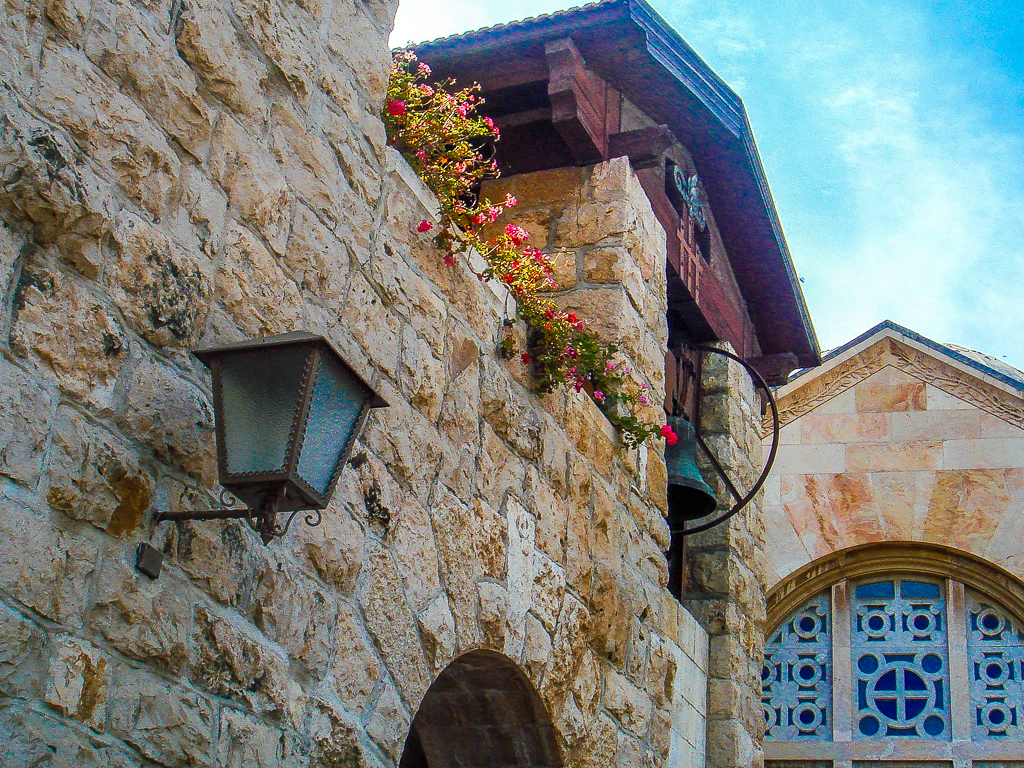 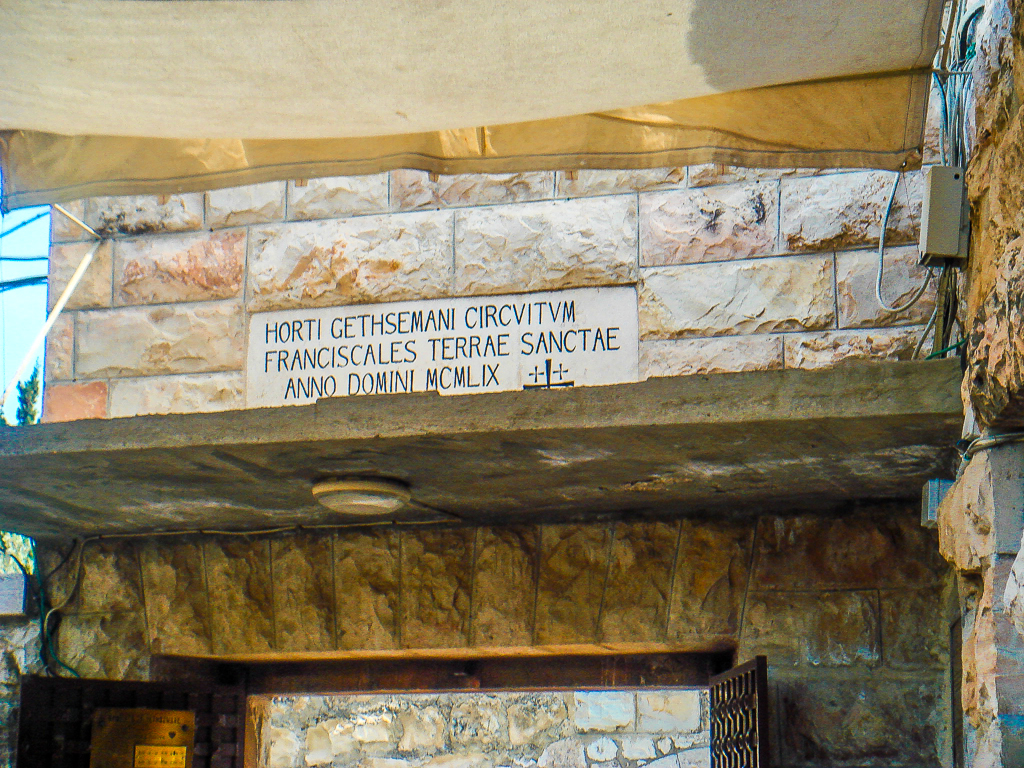 Inscription over the gateway to Gethsemane

I stood, spellbound, the tears running unheeded down my face, as my mind regressed  two thousand years. I visited many places during my trip to Israel but nowhere did I have such a reaction to my surroundings. 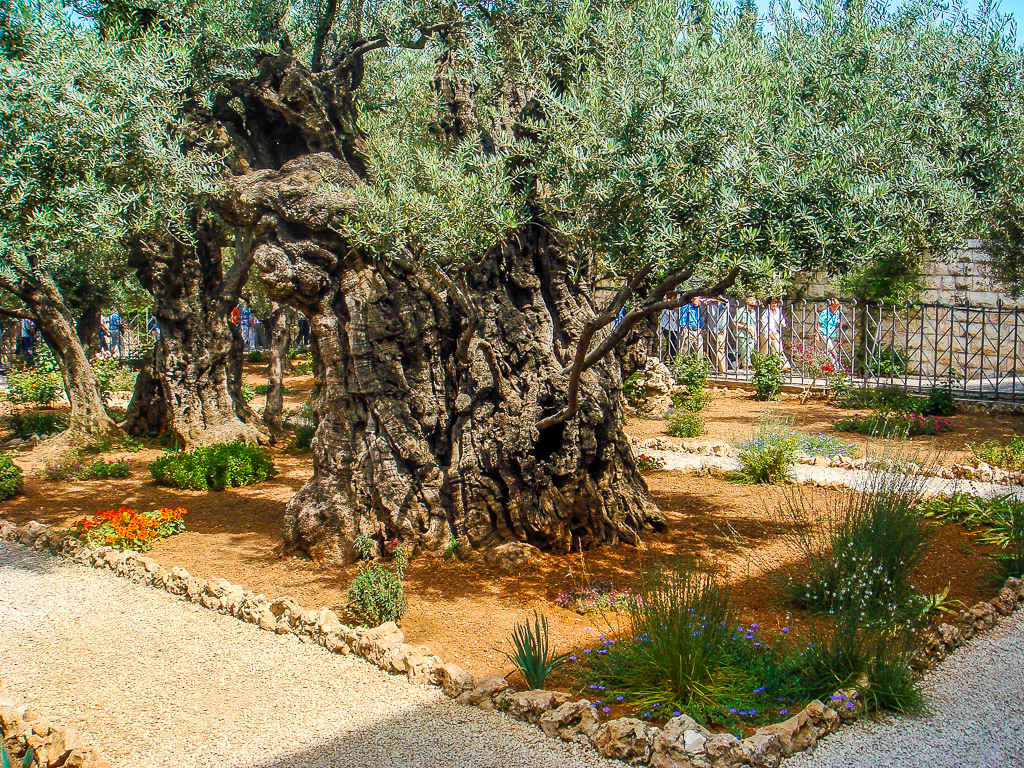 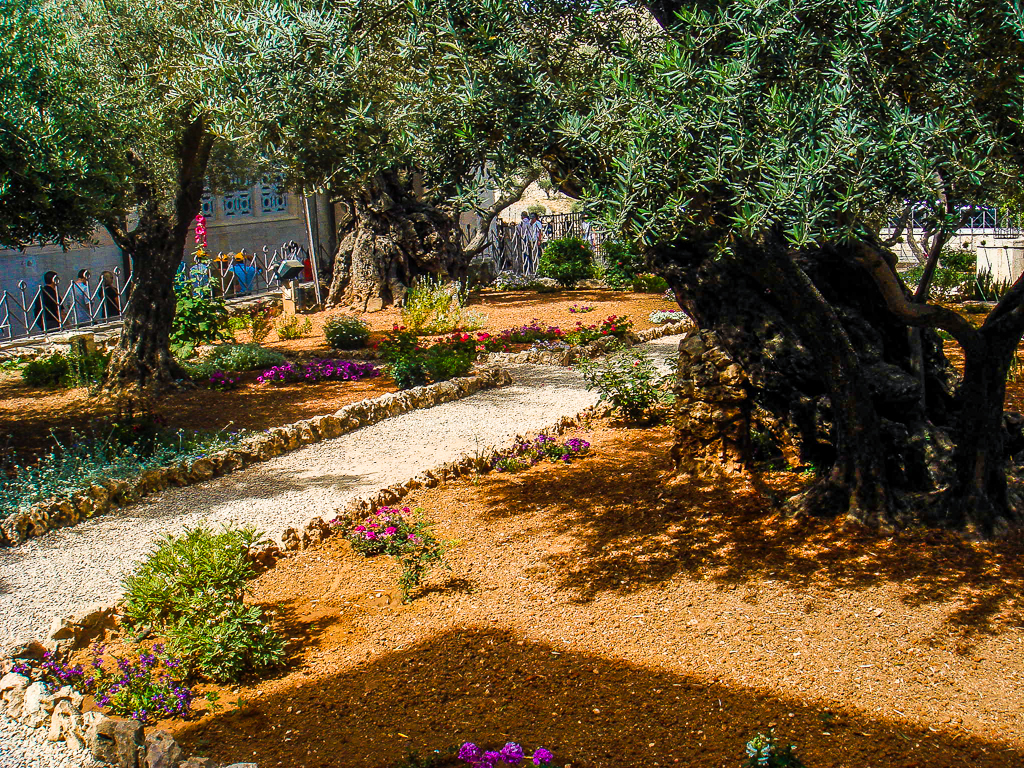 Ancient Olive Trees in the Garden of Gethsemane

The Arrest of Jesus of Nazareth sculpted in stone 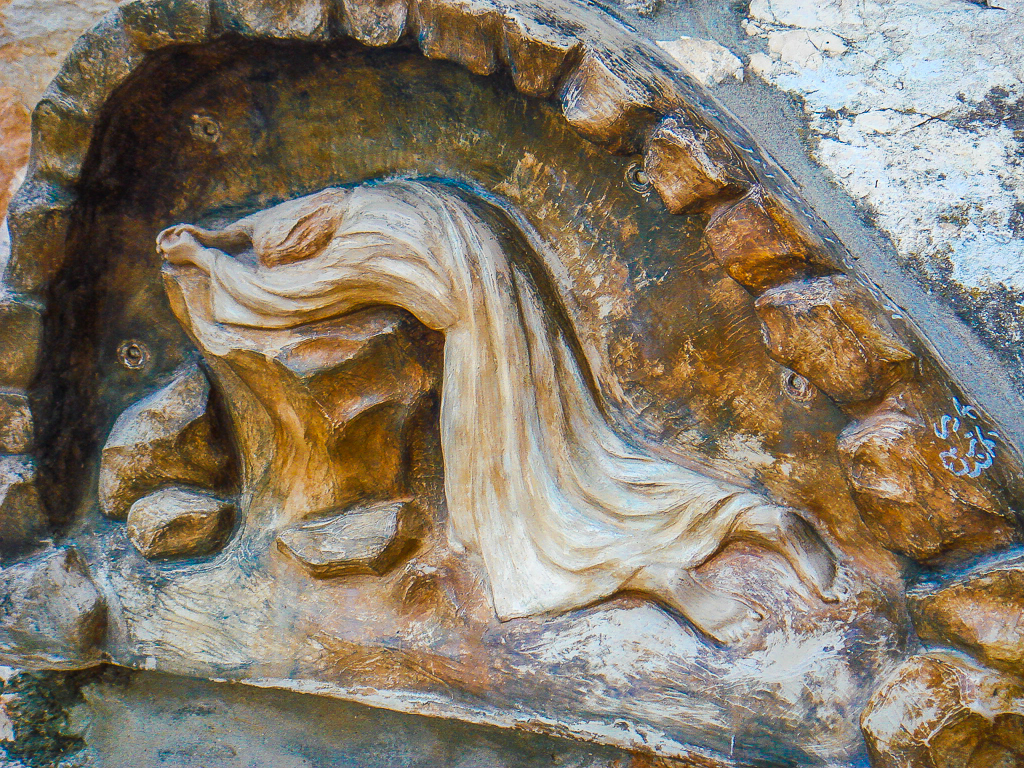 Jesus Praying to his Father in the Garden of Gethsemane 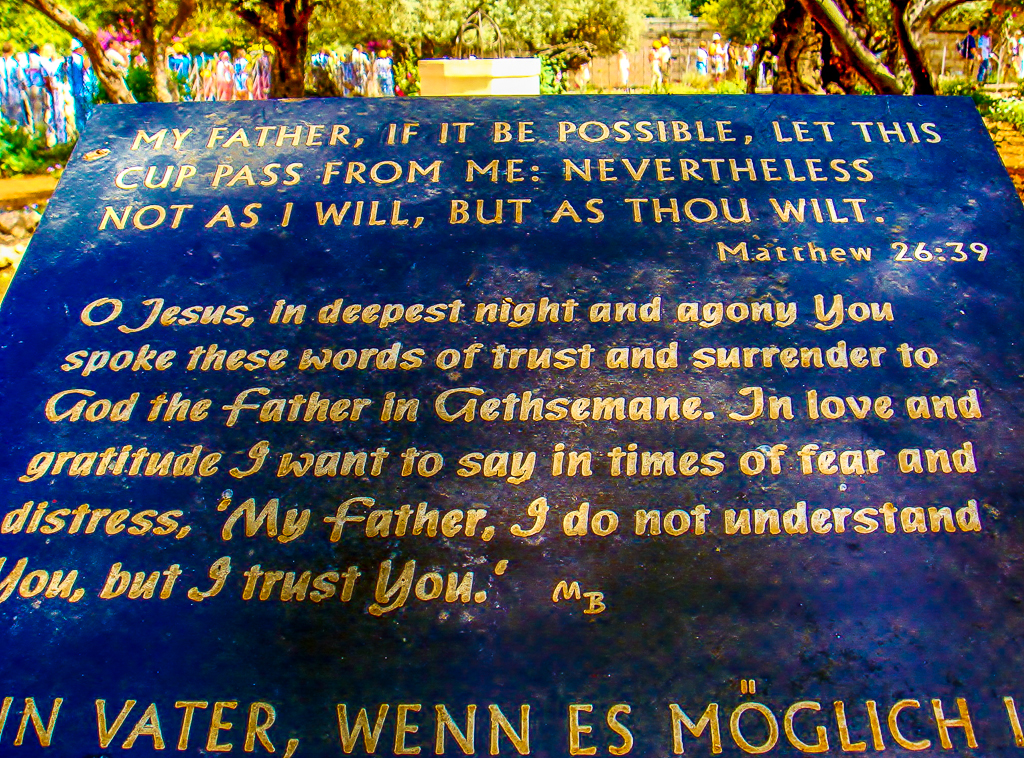 Inscription in the Garden of Gethsemane

This place means something to me. Although it looks very different 2000 years on, the vibrations are still here; they’re in the ground. This is holy ground. The great Master Jesus walked here.

After spending some time at Gethsemane and visiting the interior of the Church of all Nations, we walked slowly back up the steep hill towards the Old City. 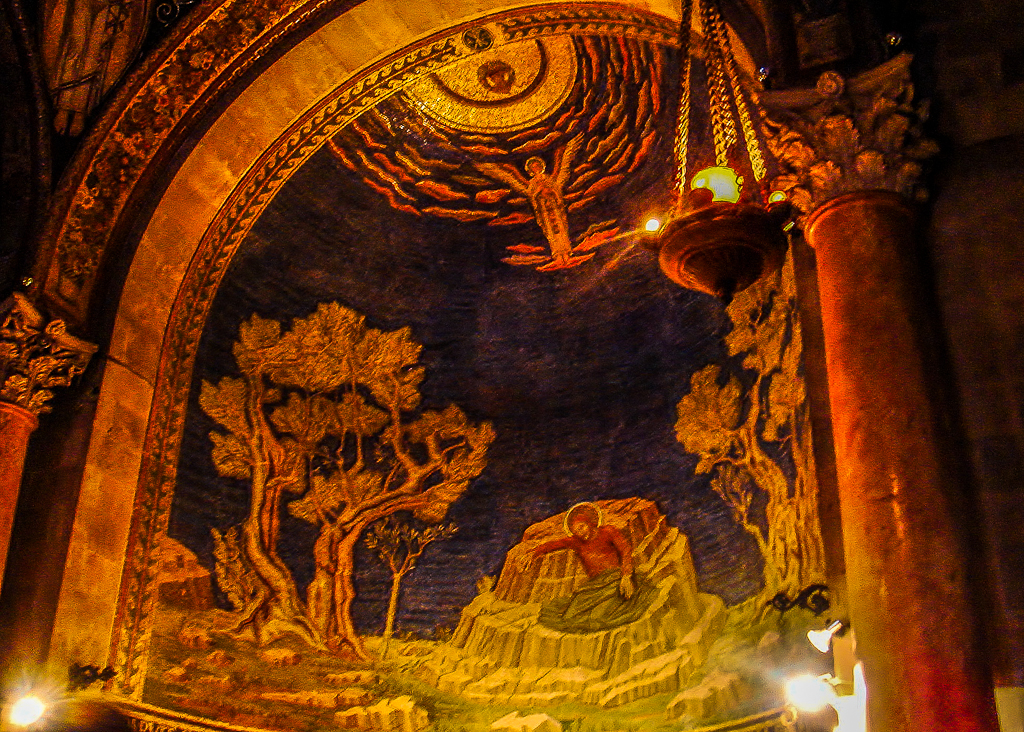 Amazing Art in the Church of all Nations

I turned to gaze back across the Kidron Valley towards Gethsemane and I knew that I would return here before too long. 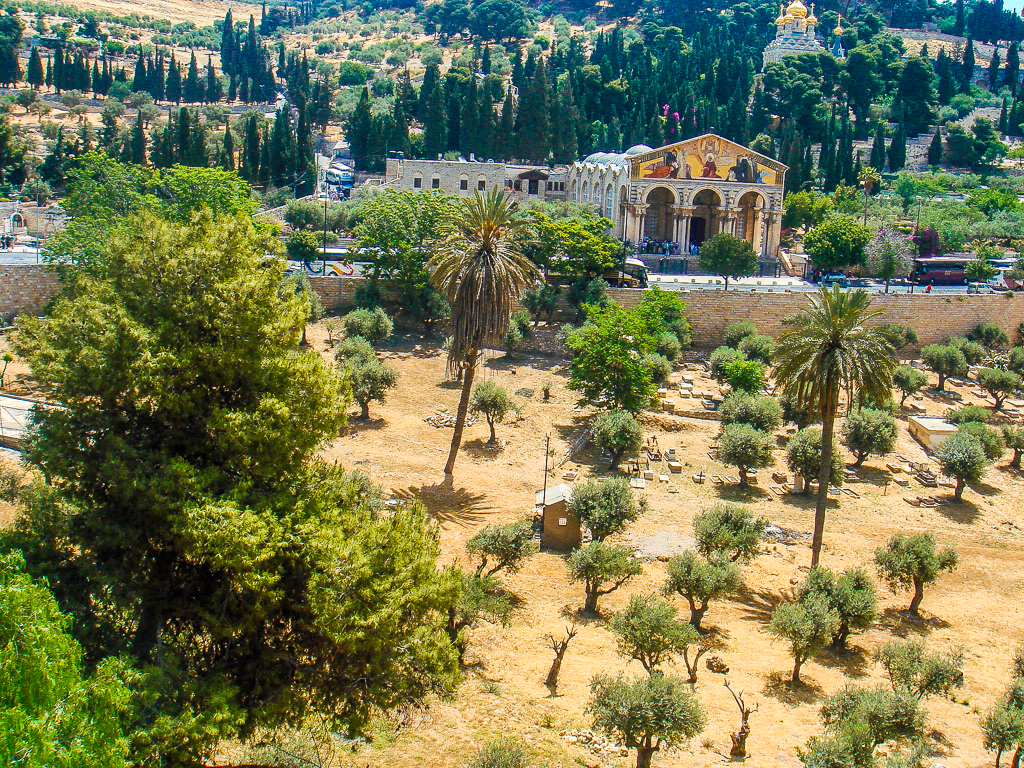 We returned to the hotel just in time to see our taxi arrive, and were whisked on a hair-raising ride for the hundred miles or so, up to Tiberias on the Sea of Galilee, following the course of the Jordan River.

To Be Continued: Part 2 In The Footsteps of Jesus in Galilee

The Gaithers Concert at Jerusalem, with Guy Penrod, The Isaacs  and Anthony Burger